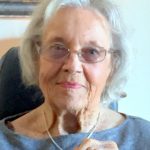 She is survived by her sons, James and Stephen, and daughter Elizabeth Ann Hamer as well as 10 grandchildren and 26 great-grandchildren.

Ann lived near Kansas City during World War II when James managed a department of a B-24 Bomber Factory; her first son James was born there.

The family moved back to Mason City where two more sons and a daughter were born, Steve, Richard and Elizabeth. They remained in Mason City until 1954 when they moved to St Paul, MN for a business opportunity.

James passed away in 1986 and later Ann married an old friend, Rutherford (Ruddy) Brosious. They spent winters at Ruddy’s home in Manzanillo, Mexico where they had many Mexican and expat friends.  Ruddy Passed away in 1999.

Ann enjoyed knitting, fashion design, needlepointing, antiquing, refinishing furniture and portrait painting. She lived independently, driving her own car until her hip replacement failed at age 92. She then moved to Lake Minnetonka Shores until passing, peacefully and without pain, at her own apartment there.

Mass of Christian burial will be held at Our Lady of the Lake Catholic Church, located at 2385 Commerce Blvd, Mound, MN 55364 on May 21st at 11:00, with visitation for one hour prior. In lieu of flowers, donations may be sent to the Alzheimer’s Association in honor of Richard (Dick) Wagner.

Offer your condolences here for Ann’s loved ones.